A History of Mojacar Bowls Club by Alan Bramble

The most significant date in the history of bowling in Spain was 15th May 1976 when David Bryant CBE bowled the first bowl on Spanish soil to officially open the first bowls club at Las Palmeras Hotel in Fuengirola, although bowling had just arrived in Spain it was quick to become popular along the Costas.

Then in September 1984, bowling was introduced to this area of Almeria high up in the Cabrera mountains with a development that included several bowling greens, the start up of the David Bryant Bowls Centre later to be called the Cabrera Lawn Bowls Club.

A few years later in 1987, a second development was started by Michael Gem a retired Naval officer with a vision to build a sports complex in Mojacar at La Mata comprising, a swimming pool, tennis and squash courts including an eleven room Hotel and two bowling greens overlooked by luxury apartments.

A short time later, our Bowls Club, initially known as Club La Mata and then La Mata Lawn Bowling Club was subsequentlyset up and based at the La Mata hotel.

By October of that year, about 30 enthusiastic bowlers had joined the bowls club at La Mata even though only very basic bar and club facilities existed at that time.

In June 1990 with the completion of all facilities and by now with two bowling greens, the Club La Mata had built up a strong membership of over 100 members with a full program of competitions and social bowling, The Club La Mata went from strength to strength to become a mecca for bowling groups from the UK looking for the opportunity to enjoy bowling in the sun.

During 1992 the Club La Mata successfully co-hosted with the Cabrera bowls facility the World wheelchair championships, followed by the Spanish national lawn bowls championships in 1993.

The mid 1990’s was a time when the sport of bowls in Spain had advanced to the stage where it faced a choice to either stay as it was or whole heartedly embrace the way forward and make the sport fully legal in Spain.

All bowls clubs were offered the opportunity to become registered with the Sports Federation responsible for bowling in accordance with the recently introduced Spanish law of sport (1990) and so enable bowls to be recognised nationally.

While the La Mata Lawn Bowling Club enjoyed some very successful times in the early years, it also went through some very difficuly and worrying times which included the closure of both bowling greens on at least two different occasions by the successive owners of the Hotel with obvious detrimental effects to the stability and well being of the La Mata LBC.

During the period 1998/1999 the then owner of La Mata Hotel cut back on the expenditure of the Hotel and as a consequence stopped watering the greens which deteriorated to the state of resembling a car park rather than a grass bowling green.

By the end of 1999 La Mata Hotel had been sold again, Under the new ownership the back green was allowed to deteriorate as the new owner had intentions to build on it, while the front green was restored to an acceptable condition once more to allow the continuation of bowls.

During this time the club members faced significant problems with the managers installed by the owner, which resulted in the members of the club being informed that the bowling green would be closed at the end of December 2000.

Sometime in the problematic period 1999/2000 he club would have closed but for the determined efforts of Derek and Thea Walle who kept the hotel premises open for club roll up days.

Also at that time a problem came to a head with the original Cabrera bowls club following a longstanding dispute with the owners of the site.

This fuelled a growing desire amongst a number of bowlers from each of the clubs in the area to join a new club being set up that would be fully owned by its membership, Many members of La Mata LBC also left to join the new club making it necessary to call an EGM in November 2000 specifically to wind up the Club and dispose of its assets.

Friday 26th January 2001, the La Mata LBC members held their last dinner dance at the “Parador de Mojacar” where many members wore black in protest at the closure.

Through the determination of several members, bowling somehow managed to continue at La Mata albeit on a limited scale with about 20 supportive members , not wishing to see the club close down. La Mata LBC members Bob & Moira Stewart entered into discussions with the owner of La Mata Hotel and by October they had managed to convince the owner that bowling would be an asset to the Hotel and that La Mata LBC should be revived, initially on a month-by-month basis.

Over the following years La Mata LBC gradually grew back to a strong membership, however the owner decided that because bowls did not fit in with his future plans, he would permanently close the green at the end of December 2010.

In a bid to keep our club together by whatever means after the loss of our bowling green at the La Mata Hotel, the idea of obtaining a new bowling green had seemed like an almost impossible dream. The task ahead of us was made easier to bear because of the considerable help and support given by our committee and other members who stayed with our club throughout those difficult times when we were without without our own green.

Talks were soon held with the Almeria Bowls club where it was agreed that our members could join Almeria bowls club while retaining their membership of La Mata LBC until such time as our club had a new bowls green once again.

Early in 2011, an approach was made by Tony Millington and myself to Rosa Caño the Lady Mayor of Mojacar to ask for her help, the Lady Mayor responded immediately by giving a promise to help our club and to build a new bowling green as soon as finance could be obtained from the Diputacion de Almeria.

The Lady Mayor also explained that our Club should consider changing its name from La Mata LBC to avoid any possible political difficulties that an implied association with the owner of the La Mata Hotel might present, the name of our club was subsequently changed to the Mojacar (La Mata) Bowls Club.

After a demanding three years of discussion with the Lady Mayor resolving a myriad of questions and details, the promise given by the Lady Mayor started to become a reality when the contract for the construction of the bowls green was officially signed and construction work finally started in May 2013.

Our request was accepted, but the financial constraints of the contract meant the green had to be reduced to just 6 rinks wide instead of the hoped for 8 rinks to ensure total build costs were not exceeded.

Construction of the bowls green foundations began in May 2013, four months later the carpet was laid, an exciting time and another step towards the end of uncertainty for our club.

The start of 2014 began on a very low ebb for our Club when the result of the Tender procedure was formally issued by the Ayuntamiento, advising that Mojacar Bowls Club had not been successful in being granted the concession to manage the bowls green.

The official explanation stated that our Club had failed to comply with part of the financial requirements in the contract.

The contract requirements in question were not within our clubs or indeed any other Bowls Clubs capability to be able to legally satisfy, consequently our submission was declared void ~ by default Servigroup Hotel was granted the concession to manage the new bowling green facility.

After some reflection (and with the help of a few glasses of wine at the Millington’s abode), it was quickly realised that there were some advantages for our Club with Servigroup having been granted the contract, especially as the financial and legal commitments involved in the management of the bowling green facility would not now be a burden or responsibility on our Club.

The decision was made to see Ricardo Escudero MD of Servigroupas as quickly as we could, the moment proved to be the first of many such positive discussions over a period of time that have established a trust and working partnership with Ricardo and his staff.

2014 was a very important and exciting year for our Club with the official opening of the bowls green by the Lady mayor of Mojacar on 7th March, it was a fitting conclusion to the promise given by Rosa Caño to help our Club back in 2011.

Our club is now approaching its 6th anniversary with its membership increasing year on year to the maximum capacity considering the limits of our green - we now need a green with an increased number of rinks, preferably 8.

The slide show below is from December 2010 just before the La Mata  green closed donated by Diane Reynolds collection. with also a slide show from 2013 of the construction of the new green. 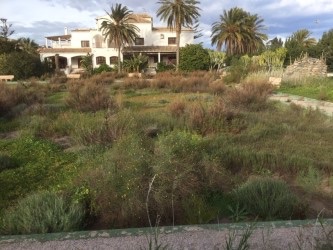 March 2018 saw the eagerly awaited completion of the new enclosure which had been about a year in the discussion stage of the project, then finally ~ not even a brief but heavy rain storm could stop or even delay the finishing touches.

The new enclosure financed by the Mojacar Ayuntamiento under the guidance of Ricardo Escudero Director Servigroup Hotels (Mojacar), will be a much valued addition to the existing facilities enjoyed by our bowls club.

The new enclosure will give a spacious and comfortable relaxation area offering complete protection from the occasional bad weather as well as much needed shelter from the sun during the greater majority of the year. The enclosed area is large enough to hold considerably more than the current club membership with ease and could even enable various functions to be held with some style and comfort should the need arise.